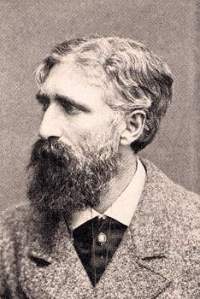 Charles Dudley Warner (1829-1900), author, critic, an editor, is best known today for his collaboration with Mark Twain on The Gilded Age (1873). Born in Plainfield, Massachusetts, on September 12, 1829, Warner worked on his guardian’s farm from ages eight to twelve, an experience that informs the memoir Being a Boy (1877).  After graduating from Hamilton College in 1851, Warner, hoping to restore both his health and his fortune, joined an engineering corps surveying lands in Missouri.  After returning east, he married Susan Lee (1838-1921) (http://www.harrietbeecherstowecenter.org/hbs/nook/warner.shtml) in 1856 and received a law degree from the University of Pennsylvania two years later.  He practiced law in Chicago before moving to Hartford and beginning his journalistic career in 1860. He was a founding member of the literary colony at Nook Farm, whose members included Harriet Beecher Stowe and Mark Twain.

Warner’s principal contributions to journalism are his editorship of the influential newspaper The Hartford Courant and his exploration of the essay as a genre.  In 1861, he assumed the editorship first of The Evening Press and then of The Hartford Courant, later consolidating the two papers.  During the Civil War, Warner contributed essays and sketches to the Courant, consciously choosing, according to Annie Adams Fields, to focus on lighter domestic fare that would distract readers from the conflict (http://www.public.coe.edu/~theller/fields/warner.html). This series of popular editorials, later collected as My Summer in a Garden (1870), established Warner as an essayist as well as an editor, one whose genial manner and mildly humorous style recalled the work of Washington Irving.  Backlog Studies (1873) continued this tradition, being ” a kind of apotheosis of home” that nonetheless prefigured some of Warner’s critical preoccupations.

Beginning with Saunterings in 1872, Warner also published nine travel books, some of which focused on Europe and the Middle East, such as In the Levant (1875) and My Winter on the Nile: Among the Mummies and Moslems (1876; rev. ed., 1881). Others provided an in-depth look at lesser-known areas of the United States: Studies in the South and West, with Comments on Canada (1889), On Horseback: A Tour in Virginia, North Carolina, and Tennessee, with Notes on Travel in Mexico and California (1888), and Our Italy, Southern California (1892).  Many of his books were first published as essays in the major literary journals of the day, including The Atlantic Monthly, Harper’s, and Scribner’s. His editorship of the American Men of Letters biography series, for which he wrote the initial volume, a biography of Washington Irving, cemented his reputation as a biographer as well as an editor.

In addition to the genre of the familiar essay, Warner was successful as a critic and novelist.  His essays in social and literary criticism generally favored social and literary reform, albeit of a limited kind.  Although in “A Study in Prison Management” (1885) he supported flexible, open-ended sentences, and in “The Education of the Negro” encouraged African American suffrage and education, he nonetheless argued that manual training and a designedly slow pace of racial assimilation was necessary.  As a literary critic, he succeeded William Dean Howells as the writer of the influential “Editor’s Study” column for Harper’s from 1894-1898, and his judgments in the column, as in his books The Relation of Literature to Life (1896) and Fashions in Literature (1902), sought to elevate Americans’ taste in literature.  After writing the satirical novel The Gilded Age with Mark Twain, Warner examined the rise and fall of a great family fortune through a trilogy of serious novels: A Little Journey in the World (1889), The Golden House (1894), and That Fortune (1899).  Achieving popularity during his lifetime but not the enduring critical respect given to figures like Twain and Henry James, Warner died in Hartford on October 20, 1900. 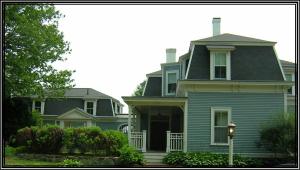 The Howells Society site at http://www.howellssociety.org (http://www.wsu.edu/~campbelld/howells/index.html) has now been moved to WordPress: http://howellssociety.wordpress.com. The new site will enable calls for papers, queries, and announcements to be posted more easily and by more members of the WDHS community.

Several of the stable pages, including some Howells texts, will remain on the WSU server for now.

“The Epic Battle for To Kill a Mockingbird“ in this month’s Vanity Fair tells the story of how a literary agent allegedly (and just put “allegedly” before all the statements here) convinced Harper Lee to sign papers that would remove control of her copyrights from her and grant them to the agent. John Steinbeck’s sons and their heirs had also had dealings with this agent, and, as a side note, had signed over powers of attorney to Elaine Steinbeck, Steinbeck’s third wife, who willed the copyrights to her own heirs and away from Steinbeck’s sons, Thomas and John. Elaine Steinbeck died in 2003,  and they have contested the provisions of her will.

The legal battles in the article made me segue into thinking about Harper Lee and Steinbeck, both of whom had written what might be called “realist fables” about American social problems of race and class. Both wrote books that are still schoolroom classics and good reads, too. To Kill a Mockingbird, which in 2009 generated a jaw-dropping $1.68 million in royalties for six months, might be more universally taught, but Steinbeck’s The Pearl, The Red Pony, and Of Mice and Men must still be taught in secondary schools. The Pearl, through which generations of students were introduced to symbolism, is a good example of the realist fable, and so is Hemingway’s The Old Man and the Sea, although Papa would surely have hated hearing it called that. It would be interesting to teach Tortilla Flat alongside his last, unfinished The Acts of King Arthur and His Noble Knights, too, both as historical and as realist fables.

If you’re talking about the complexity of Steinbeck’s novels, however, he’s at his best when he can temper the “realist fable” part of his writing with the more straightforward and direct address of what, for want of a better word, you could call “moral commentary.”  This sounds more negative than I mean it to be, but the books of Steinbeck’s where he does both–the fable and the lecture, alternating back and forth–are those that have held up best: The Grapes of Wrath, East of Eden, and The Winter of Our Discontent.

In Grapes of Wrath, there are the stark scenes of desperation and fruit picking followed by commentary from Jim Casy and to a lesser extent Tom.  In East of Eden, the distinction is clearer between the allegorical Cain and Abel/Charles and Adam/Cal and Aron storyline and the dual strands of commentary by two “outsiders,” the philosophical Chinese servant Lee and the mystical Irish neighbor Samuel Hamilton. The Winter of Our Discontent has Ethan Allen Hawley’s first-person reflections on the series of moral tests that he encounters and the symbolic nature of the objects and the figures who tempt him (talisman, masks).

The alternation between “realist fable” and “moral commentary” sounds heavy-handed, but it’s not. At least for me, it’s what makes those books worth revisiting.

“It is strange that we are so slow to learn that no one can safely live without companionship and affection, that  the individual who tries the hazardous experiment of going without at least one of them is prone to be swamped by a black mood from within.  It is as if we had to build little islands of affection in the vast sea of impersonal forces lest we be overwhelmed by them.” A New Conscience and an Ancient Evil

I’ve recently created two author society sites on WordPress, one an update of an existing site and one a new site.

Among the features of the new SSAWW site:

The old site will remain available, but all the updates will be at the new site.

Cannot begin to express the awesomeness of heroines in obscure Progressive Era novels: hanging on ledges like Superman outside buildings to eavesdrop and expose political corruption! Shame evil slumlords with their lectures until the slumlords reform! Conclude that only socialism will rid the world of “the social evil” of prostitution and exploitation of women and harangue readers about that for pages on end! Joss Whedon needs to write a sequel to THE AVENGERS called THE INCREDIBLE RIGHTEOUS LECTURERS.