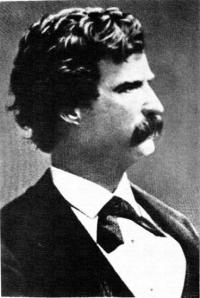 Martin Zehr’s “A New Theory Could Solve the Mystery of Mark Twain” in the Kansas City Star  profiles a discovery by Twain scholar Kevin Mac Donnell, who presented it at the recent Conference on Mark Twain Studies (the Elmira conference).

Mac Donnell made use of the Google Print Library Project, a search tool not available to earlier scholars. He was searching through 19th-century humor magazines when he came across a character in a burlesque sketch by the name of Mark Twain. It was in the Jan. 26, 1861 issue of Vanity Fair, a short-lived but widely read humor magazine of the era Twain is known to have read.

The anonymously published sketch in which the character appears, titled “The North Star,” is a send-up of Southerners at a nautical convention attempting to address the nagging problem of compasses always pointing north.

Successive speakers in the sketch, including Mr. Pine Knott, Mr. Lee Scupper, Mr. Mark Twain, Mr. Robert Stay and Mr. Rattlin, whose names are derivatives of sailing terms, gripe about the problem. The Civil War is about to erupt and will close the Mississippi River, ending Sam Clemens’ piloting career. As used in the sketch, the name Mark Twain is an indication of shallow water for an ocean-going ship, and, by inference, a person lacking depth.

Mac Donnell’s exposition, which appears in a detailed version in the current edition of the Mark Twain Journal, includes the observation that Charles Farrar Browne, aka Artemus Ward, a print and standup humorist Twain admired, was then a staff writer for Vanity Fair.

Mac Donnell’s research fills an important gap in the story by suggesting Clemens’ likely familiarity with the  piece two years following its publication.