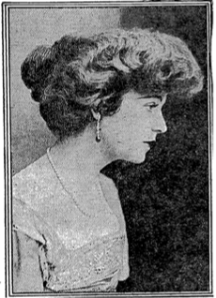 Katherine Harris Barrymore, the Lily Bart of this film, from http://aestheteslament.blogspot.com/2012/01/well-said-lily-bart.html

As part of my current book project, Bitter Tastes: Naturalism, Early Film, and American Women’s Writing, I’ve been working with a lot of silent film resources, including reviews, in addition to writing more about Wharton.

Here’s a gem from Variety, August 23, 1918: a review of a  now-lost film adaptation of Edith Wharton’s The House of Mirth.  Excerpts:

It has been scenarioized by June Mathis for Metro, directed by Albert Capellani, photographed by Eugene Gaudio, all of it with rare excellence for the respective efforts, but the layout  is not a good one for a feature picture for the reason that the majority of the principals are a rotten set, not worth wasting time over, especially as none of them get their just desserts.  . . . And so on, etc., until you are led to believe that no one is on the level and it develops that everybody has the goods on everybody else.

At the middle of the fifth reel the aunt having died and left the girl penniless, she seeks work, doesn’t find it, she tries suicide and is rescued in time for a clinch with the lawyer.  The remainder of the cast are left to continue their incessant prowling for affairs with those of the opposite sex.

This was clearly an A-list production. June Mathis was a talented scenarist, famous for discovering Rudolph Valentino, and the French director Albert Capellani directed such notable films as Camille and The Red Lantern.

Since Selden (“the lawyer”) arrives in time for a clinch rather than too late, the production delivered what W. D. Howells told her the American public always wanted to see: “a tragedy with a happy ending.” Also of interest to Wharton fans: the cast list includes “Bertha Trenor-Dorset” and “Augustus Trenor-Dorset,” a neat conflation of the Bertha and George Dorset and Judy and Gus Trenor of the novel.

“Rotten mess” though it might have been, it’s too bad that this is a lost film. Wharton would have been pleased, though, that Jolo, the reviewer for Variety, understood the “despicable” nature of the society she described.