What made Aaron Burr become Aaron Burr?  Not just in 1804, but before and after?  I can think of no historical figure for whom Milton’s phrase “sense of injur’d merit” applies more strongly–and yet Milton, in Paradise Lost, was talking about the motivation of Satan.

The Burr that emerges in Gore Vidal’s novel (Burr, 1973) is supremely cynical, which sounds close to the mark, as does the outraged, haughty, secretive, and slippery Burr that Ron Chernow describes in Alexander Hamilton. I haven’t come to sections dealing with Burr in Joanne Freeman’s Affairs of Honor  yet, or finished Nancy Isenberg’s Fallen Founder.  Since I’m not a historian, Burr remains for me a fascinating literary character, and a tragic one. 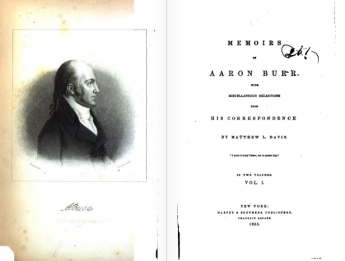 A. Burr and his Memoirs.

Matthew Davis’s  Memoirs of Aaron Burr (1836, 1855) (free at Archive.org) includes a raft of letters portraying Burr as the brave young officer, something of a martinet but a rational one. Among the interesting pieces there is a letter from Gen. Charles Lee, who confirms a Hamilton lyric by writing to Burr in October 1778, after he had been sentenced at his court-martial:

“As I have no idea that a proper reparation will be made to my injured reputation, it is my intent, whether the sentence is reversed or not reversed, to resign my commission, retire to Virginia, and learn to hoe tobacco, which I find is the best school to form a consummate general” (135).

As Thomas A. Foster writes in Common-Place, however, Davis was not a sympathetic biographer, at least where Burr’s relationships with women were concerned; that would wait for the later biographer James Parton, perhaps better known to most 19th-century Americanists as the husband of Sara Willis Parton (Fanny Fern).

Burr as an older man, behind a tissue mask in the frontispiece of The Private Journal of Aaron Burr.

But The Private Journal of Aaron Burr (1903; free at HathiTrust) already gives a less elevated picture of Burr, and in his own words. It’s a book that could be subtitled Down and Out in Paris, London, New York, &c.  It’s difficult to reconcile the man of such intellectual gifts and bravery during the siege of Quebec and the Revolution, who (maybe, kind of, sort of–but acquitted!) thought about establishing a Western empire, with the man we see in his daily life drinking a little too much and seeking out some cream of tartar punch for the hangover, visiting his tailor, ordering a chess set, and so on. The reader can only think about the waste of talents that this represents.

Which brings me back to the original question: why did you do these things, Burr? Chernow makes a good case about why the duel with Hamilton occurred, but so much of the rest seems inexplicable.

Harriet Beecher Stowe explains it all, but she had a soft spot for bad boys like Burr, according to Wilson.

Fearless as always, Harriet Beecher Stowe enters the fray in The Minister’s Wooing  (1859) and Oldtown Folks, by presenting two fictional versions of Aaron Burr. In The Minister’s Wooing, Senator Burr is brought up short by the memory of his mother as his better nature struggles with his darker side:

Burr was practised in every act of gallantry; he had made womankind a study: he never saw a beautiful face and form without a sort of restless desire to experiment upon it, and try his power over the interior inhabitant. But just at this moment something streamed into his soul from those blue, earnest eyes, which brought back to his mind what pious people had so often told him of his mother—the beautiful and early-sainted Esther Burr.

In Oldtown Folks, Burr is “Ellery Davenport,” grandson, as Burr was, of Jonathan Edwards. Davenport challenges his grandfather’s doctrine of predestination and points to the sorry state of Christianity as it is practiced to support his point:

Taking the mass of human beings in the world at this hour, they are in such circumstances, that, so far from it ‘s being reasonable to expect the morals of Christianity of them, they are not within sight of ordinary human decencies. . . . That ‘s what I call visible election and reprobation, get rid of it as we may or can.” 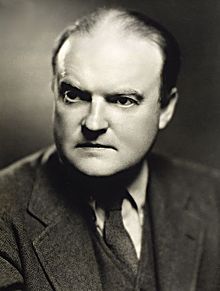 Edmund Wilson, who in person could be as terrifying as this picture.

As the critic Edmund Wilson sums up Stowe’s argument:

Her point is that Jonathan Edwards, in his overweening spiritual pride, had put the Calvinistic qualifications for Election and Salvation so high, at a level so unattainable by the ordinary man–this matter had been much on Harriet’s mind ever since her brother Charles had been driven to despair by reading the treatise by Jonathan Edwards–that Aaron Burr, also the son of a clergyman and brought up in his grandfather’s shadow, had from the start been discouraged with religion and led by a powerful intellect completely to discard morality in furthering his own career.  This picture of Aaron Burr is thus a part of Mrs. Stowe’s expose of the pernicious effects of Calvinism (Patriotic Gore 49).

Wilson adds, “The truth is that this sort of character–sophisticated, clever and fearless–rather piques and excites Mrs. Stowe” (49), as she was later to show in The True Story of Lady Byron (1869), where she shows sympathy for Lord Byron despite his misdeeds.

The complexities of human nature are such that no one thing can explain Burr. But Stowe’s (and Wilson’s explication of Stowe’s answer) give the reason for Burr’s behavior in logic that my students often point out when we study Edwards: if you’re already predestined not to be saved, why be good?

One thought on “What made Aaron Burr AARON BURR? Edmund Wilson and Harriet Beecher Stowe have some answers.”