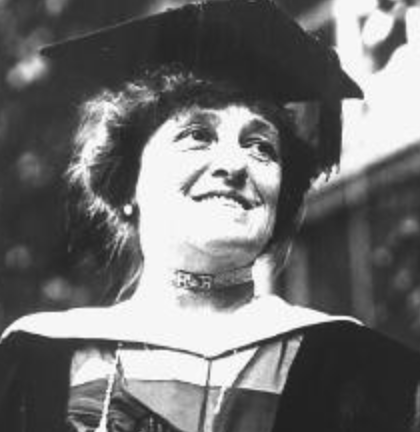 It’s no secret that literary critics are shaped by their era, no matter how much the New Critics tried to pretend that they existed in a realm of Universal Truths about Aesthetic Judgment, so I’m not here to pile on to Vernon Louis Parrington’s Main Currents in American Thought (1930).

Parrington was a giant in his day, and he synthesized and explained what he saw as, well, the main currents, etc.

Parrington died before completing the last volume of Main Currents, which exists as a sequence of lecture notes and previously published essays.  It’s a kind of critical voice–definitively categorizing, full of sweeping pronouncements, and obsessively worried about ethical actions and judgments–that would never get you past the covers of PMLA today. Who but Parrington could sum up Norris’s unfinished Vandover and the Brute  by calling it “a huge and terrible torso”? (332). And he does talk about now-forgotten naturalist authors like Ernest Poole (The Harbor, 1915) and progressivist Winston Churchill (the novelist, not the politician).

Yet the book is unaware of its own (whiteness) blinders: I saw no references to popular African American writers of the era that he covers so conclusively, such as Frances E.W. Harper, Charles W. Chesnutt, Pauline Hopkins, or Paul Laurence Dunbar. And how can you treat “main currents in American thought” without the insights of W. E. B. DuBois or at least a mention of The Souls of Black Folk?

As I alluded to in a tweet this morning (the one that made me want to write this post) Parrington’s judgments give a window into thoughts of the era but increasingly diverge from our own.

Now here is the head-scratcher for modern readers: lumped under the heading “Certain Other Writers” with Willa Cather, comprising the front and back of two pages (381-384) for both of them, is “Edith Wharton–The Genteel Tradition and the New Plutocracy.”

In other words, Parrington devotes a chapter each to Dreiser, Lewis, Cabell, and Ole Rolvaag , but the front and back of a page each for Edith Wharton and Willa Cather, which for the time was probably about right.

Calling Wharton a “temperamental aristocrat” who was “isolated in America by her native aristocratic tastes” (I see what you did there, V.L.), Parrington approves of House of Mirth (Selden and Trenor are “the aristocrat and the plutocrat” [381]), Ethan Frome (“a dramatization of the ‘narrow house’ theme” [381]), The Custom of the Country (“a study of the social climber” [381]), The Age of Innocence (“an admirable work” [382]), and Old New York (“A return to her best manner” [382]). The rest of her work is “not important.”

Summing up, Parrington says “Mrs. Wharton a finished artist who grasps her material firmly; an intellectual attitude, delighting in irony” (382).

For those keeping score at home, let me sum this up:

Cabell: a thinker, interested in “cosmic forces,” in touch with “deeper realities” through his contemplation of an abstract conception of “woman.”

Wharton: not a thinker but an observer, an “aristocrat” (x3), and–most damning of all–a relic of the genteel tradition.

I said on Twitter that Wharton must have been laughing in four languages at a judgment like this. Wouldn’t her extensive reading in social and biological evolutionary thought qualify her has a “cosmic” thinker? In fact, wouldn’t her status as an actual woman give her a little insight into what makes Cabell so special?

This little exercise in how literary reputations are made is just of many instances, of course, but if Edith Wharton–pictured in 1923 when she received an honorary degree from Yale University, the first woman to be so honored–is laughing, this may be why.