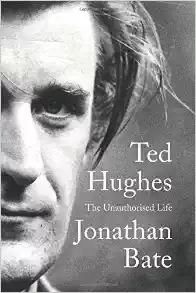 As a counterpoint to reading for work, my reading for pleasure tends to be nonfiction on either subjects (British literature), disciplines (history), or time periods close enough to be interesting but with enough distance to provide an escape. In practical terms, these tend to be biographies (John Hay, Jack Kerouac) or popular nonfiction (The Bully Pulpit, Stephen Crane Remembered).

Since these are reading for pleasure, I don’t pretend to have any special insight into the subjects they cover but thought that this blog might be a good place for thoughts about them.

The most recent book is Ted Hughes: The Unauthorized Life by Jonathan Bate. The press surrounding this book has tended to sensationalize its revelations (go read them if you want to) and has earned the condemnation of Janet Malcolm, whose The Silent Woman on Sylvia Plath and the perils of biography I’ve read several times and who condemns this work and what she calls its superficial readings. Bate has gone on record saying that the Hughes estate’s withdrawal of permission to quote from Hughes’s poetry forced him to cut out huge portions of the manuscript.

What struck me about the book, even in this truncated form, isn’t the gossip but its its account of Hughes’s process of poetic creation. I knew something about this (Graves’s The White Goddess, etc.) from a grad class in which we read “The Jaguar” and Crow, but it’s not until the later chapters that Bate speaks powerfully to this. Bate clearly sees Lupercal and to a lesser extent Crow as the highlight of Hughes’s career, with occasional descents after that into vatic self-importance amid some genuinely good poems and a host of public performances (as Poet Laureate and public intellectual) that diluted his gifts.

Despite praise for Hughes’s translations, which were (I looked this up) his poetic reconstructions or renderings from a word-for-word translation created by a fluent speaker of the language (Hughes could speak French but not other languages), Bate sees these as an evasion, too.

Bate sees Hughes as roaring back to life with The Birthday Letters (1998), however. What the chapter on The Birthday Letters reveals is that they were written over the course of years but unpublished due to fears of feminist and other critical backlash. (Feminists and critics in this book are represented pretty much as shrieking harpies and vultures, respectively.) 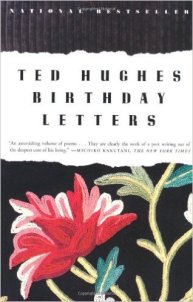 Bate shows Hughes as constantly on the edge of a more confessional mode–in the early 1970s, for example–but held back by these fears. It’s as though Hughes teeters on the confessional versus vatic/safe imagistic poems precipice and goes with safety but then unleashes his powers in The Birthday Letters. The Birthday Letters frees him, but Hughes expresses the thought that it may be 30 years too late for the electric voltage of the early poet of “The Thought Fox” and “The Jaguar.”

Bate spends chapter 30, “The Sorrows of the Deer,” in explicating both a later volume, Howls and Whispers (509) and a Silvine notebook, likely composed before 1969 (511), called The Sorrows of the Deer. Containing 22 poems, the notebook could, claims Bate, have “expiated both [Hughes’s] grief and his guilt” if published in the 1970s. It’s a chapter about Hughes in elegaic mood, but the meta version is that Bate expresses some sorrow, too, for the poet that he thinks Hughes could have been.

Bate repeatedly compares Hughes to Wordsworth, right down to his use of his vivid journals being similar to the use that William made of his sister Dorothy Wordsworth’s journals. Another notebook, a “Challenge Triplicate Book,” contains a 5,000 word draft of what could have become Hughes’s version of Wordsworth’s The Prelude. Bate reads in detail a poem called “Black Coat: Opus 31,” linking it to Hughes’s life but also demonstrating how its Wordsworthian “spots of time” of grief, memory, and loss recall Wordsworth. Bate says that there are thousands of unpublished pages in the archives and that a whole book could be written on the composition of The Birthday Letters.  Knowing academics, I’m pretty sure there’s probably one in production right now.

I haven’t finished the book yet–two chapters left to go– and can’t say whether Bate has a grand summing-up on Hughes’s career. I’m also not up on the status of Hughes’s literary reputation.

What interests me primarily is this book’s achievement as a literary biography, even in its current form, and a question. Does Bate believe that Hughes has somehow failed the poet that he might have been by refusing to take (in a Frost quotation he uses often) the road less traveled? Is it the biographer’s place to judge the achievement of his or her subject, and, if so, to what extent?

The near-lifesize figures on the wall at the Red House, now buried in south-east London suburbia at Bexleyheath, are now believed to represent the joint work of Edward Burne-Jones, Dante Gabriel Rossetti, his wife Elizabeth Siddal, Ford Madox Brown and Morris.

“In the morning we had one and a half murky figures, in the evening we had an entire wall covered in a pre-Raphaelite painting of international importance,” James Breslin, property manager at the Red House, said.

“We had no idea what the figures, or the newly revealed inscriptions, represented, but at the Red House it pretty much has to be Chaucer, Arthurian myth or the Bible – all fairly daunting works to start reading line by line.”

The property managers decided to tweet an appeal for people to help identify the text, and Breslin said that within an hour a tweet came back saying “Try Genesis 30:6”, which reads: “And Rachel said, God hath judged me, and hath also heard my voice, and hath given me a son.”

The figures are from the Bible, including Rachel, Noah holding a model ark, Adam and Eve, and Jacob with his ladder – the latter possibly by Morris himself – painted as if on a tapestry furled across the wall.

However the imagery is more complex, because scholars believe it also relates to another cherished pre-Raphaelite Arthurian legend, Sir Degrevaunt who married his mortal enemy’s daughter. But then neither family thought much of Morris’s choice of Janey Burden, the beautiful daughter of an Oxford stable man.

Side note: This was originally tweeted by @HistoryLondon and retweeted by @PaulFyfe, so in addition to helping The Red House to identify the source, Twitter helped to spread the word of the discovery. We’ll be talking about the Pre-Raphaelites in English 372 in a month or two.