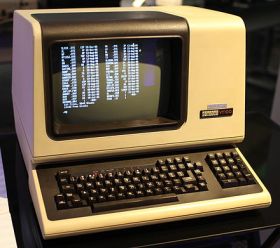 An article on Mashable tells us that “best” is dead as an email closing.  Abrupt closings are now the way to go, it seems. But everything old is new again, I guess.

In 1988, when we had Bitnet addresses, closings depended on the level of formality.  For formal emails–not that there were as many academics to write to back then–I used good old “Sincerely,” like a letter. Or “Cordially.” For friends, no closing, or maybe just your name.

When we used names, we used “Dear X” for a while, and then “Hi, X.” Getting rid of that comma–which is grammatically necessary but Not Done in email, which then was “e-mail”–was a hard habit to break for me.

But you had to pay attention to what you were typing and keep it short, because the email client we used back then on those black background-and-amber-lettered VAX terminal screens (Pre-PINE) wouldn’t let you go up a line to correct a typo. There was no possibility of cut and paste. If there was a typo and you’d already gone on to the next line, you started over, if you were writing a formal message. If you were writing to a friend, the friend wouldn’t care.

Then in the early 1990s I started seeing the ones we see today: “Best,” “Best regards,” and, in one from about 1997, “All best,” which puzzled me at first until I grew to like the economy of it.

As more people sent email, the closings varied more: “Warm regards,” “Cheers,” “Best wishes,” and the now-ubiquitous “Thanks” even though no favor had been requested or rendered.

In the 2010s, people started to use “I hope you are well” at the beginning of all emails, and the signature files grew from a manageable and agreed-upon length of 4 lines to 5+ lines, sometimes with graphics.  Some started using just the closing (“Thanks,” usually) and the signature file without typing a name above it, maybe because they’d already used up all the courtesy at the beginning of the message.

And now, we’re told, “Best” is out, as is “Thanks,” because there must be fashions and fashion experts in all things, even email.

I’m still a fan of “Best” or “Thanks” because leaving just the period at the end of the last sentence seems curt.

But another very old email rule, one I internalized long ago, is that you can mimic the style of the messages you’re sent. If you don’t want to use a closing or salutation in a message to me, my reply won’t have them, either.

Over at Wonders and Marvels, there’s a post up about novels published in shorthand. http://www.wondersandmarvels.com/2014/10/novels-in-shorthand.html

I’m intrigued by this, since there’s been a push lately to write/read/treat as a serious scholarly enterprise novels written in emoji. In fact, this is what some of the cool kids seem to be doing these days in pressing the edge on media studies and digital humanities: http://www.ox.ac.uk/event/ukiyo-e-emoji-museums-digital-age. It seems to me there’s a continuum between this and other forms of electronic production based on symbols.

But since I keep up with future tech but study bygone tech in a bygone age, wouldn’t shorthand novels be just the thing? Couldn’t we treat these as attempts at a digital language and I’ve tried reading some of the novelty 19c. novels written in Morse code, but they were too impenetrable unless you’re fluent in the code.  I can read and write a little shorthand, though (Gregg, not Pittman), and I am wondering about the reading differences among these systems.